A Message to Military and Police Employees Re: Frank Meyers' Farm

This article was also published on The Art of Not Being Governed Blog.

On November 29, we learned that 85-year-old Ontario farmer Frank Meyers had finally caved to government threats, signing a contract to sell his farm to the Department of National Defence. I have spent much time, since then, considering my response to this news. 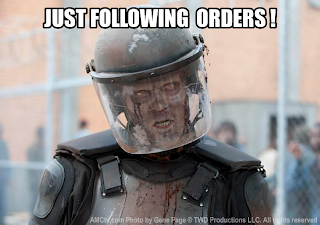 Read previous posts about the Frank Meyers' battle with the government here, here and here.

First, Frank Meyers' ultimate decision - to submit to the government's demand that he sell his farm - is not to be condemned. At the end of the day, Frank had to make the difficult decision, in order to preserve his own life, and to mitigate the harm done to himself and his family by the government through its agents; police officers, military members, court and elected officials.

Let me be clear. The contract that Frank Meyers signed with the Department of National Defence is not valid and must not be taken as a voluntary agreement. Frank Meyers signed the contract under duress, with the guns of the state pointed at him, his family and his farm. Meyers said, "They threatened me, that’s what it was. They told us if I didn’t take the money they wanted to give me they would go to court and I wouldn’t get half of what they offered me. That’s what they said."

Notwithstanding the clear lack of consent, I do not believe that the individuals responsible for the initial decision to expropriate the Meyers farm are at all likely to, in an unprecedented act of humanity, change their minds and leave Frank Meyers alone, either because they suddenly recognize and respect the need for consent or because they are moved by letters, e-mails and tweets of their "constituents".

Since I first wrote about the Meyers case, I have taken heat from other supporters of Frank for my condemnation of military members and police officers for their roles in the expropriation of the farm. Critics told me that military members, and police, both in general and those who have been involved in the Meyers eviction, probably don't agree with the government taking this action, and that they are just following orders. This is my message to government employees - police, military members, court officials, military contractors, etc. - like the ones described by many of my critics:

If it is true that you do not agree with the government's action to expropriate Frank's farm, then you must realize that it is not the government who is acting to steal Mr. Meyers property, but individuals, including yourself, whose actions make this theft possible. If, as it has been presented to me, it is not the enforcers and administrators of laws and government policies who want to carry out this theft, but a small group of immoral decision-makers, then why do not the good men and women who, I am told work for the government, refuse to carry out these immoral and criminal orders?

If you are a police officer who enforces the DND's claimed ownership of the Meyers farm, and would be prepared to arrest Frank Meyers or his guests as trespassers on his own farm, you are a party to theft.

If you are a court employee who would work to support a process that would see Frank Meyers or his guests prosecuted as trespassers on the farm, you are a party to theft.

If you are a member of the military who would work at the new Joint Task Force training facility to be built on the Meyers farm, you are a party to theft.

If you are a military contractor, or a local resident who would work to build the new facility or to service it once built, you are a party to theft, and you are guilty of profiting from the proceeds of a criminal act.

I implore those "good" government employees, if they exist, to affirm their morality by refusing to act to support the theft of Frank Meyers' farm. While it may not sit well with you to admit, if you do not refuse to follow orders that support theft, then you are not a good person, as you would claim to be, but a thief and a criminal.
Posted by Dean Tea at 17:33